This one is a bit different as I have just started playing it!

I followed the lead up to this game to (like most fans of the show and comics) fill the void left by the season break. It’s a fun, interesting game about survival, community and tough choices, all rolled into a beautifully illustrated mobile game.

‘Players are survivors in the ruins of the nation’s capital now overrun by the dead.  Potential allies and enemies lurk around every corner.  Real-time competitive play and a shared need for vital resources drive players to cooperate with and compete against each other in an all-out war for survival.

Set during the “March to War” storyline in the comics, players will encounter familiar faces from The Walking Dead as they build increasingly powerful bases, recruit and train survivors, form Communities, and capture familiar Landmarks in the shattered remains of Washington, D.C.’

The thing I like most about this game is the interesting point in the narrative of this intense story we pick up from. The ‘March To War’ arc in the comics is an exciting and terrifying time for our hero’s as they gear up to fight Negan (the big bad at the time) and unite with other communities.

This game matches that ethos very well. I don’t usually like mobile games for their mechanics, where, for periods at a time you have to wait for things to build and upgrade. This game I have a slight exception for. There is quite a lot to do when filling the space of waiting for certain aspects of your HQ to upgrade, for example, sending a team of your survivors to go fight a horde of walkers (remember, ‘zombies’ aren’t called that in the Walking Dead universe) or scavenge supplies.

The rewards you get are plenty and often, with regular missions and objectives. I particularly like that you search for survivors to join your community through your broadcast centre (radio tower), each of which have a short description of who they are and how you find them.

The short but sweet dilemma sections are really interesting too. The scenarios allow you to make decisions for your community that allow you to adopt the mindset Rick has become accustomed to in the show and comics.

I do like the narrative that is progressing steadily as well, they pick up on our characters mannerisms and characteristics quite well.

It can be a bit slow when you are waiting for things to update/upgrade but if its a game your looking for to play when your on the bus or to take your mind away for a  short break from time to time, this is a good one to start with.

If you haven’t played it but like the show, it’s worth a crack. The story is good and you will meet some interesting versions of our characters. Finally, check out some awesome artwork and concept images for the game! 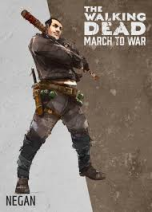